What on Earth Publishing is a UK-based children’s non-fiction publishing house. It was founded in 2010 by world history author Christopher Lloyd and illustrator Andy Forshaw. The duo pioneered the concept of a series of fold-out timeline books, called Wallbooks, that take giant stories and make them accessible for people of all ages 6 – 106.  The first title contained more than 1,000 images and captions on a 14 billion year timeline starting with the Big Bang and going through to the present day. The infographic organisation of this title – the Big History Wallbook – was ground-breaking in several ways. The logarithmic timescales was calibrated so that key events in natural history (occurring over millions of years) could be displayed on the same infographic as key events in human history that have occurred over hundreds of years. The multi-layered design also allows readers to compare what happened on different sides of the world at the same time in the past.

This Big History Wallbook, published in 2010 , has since sold more than 250,000 copies and has been translated into 10 languages. It was followed by a series of five more Wallbooks, each on a giant topic. Many of these featured strategic publishing partnerships with august institutions and museums including the Natural History Museum (Nature Wallbook) the Science Museum and The Institution of Mechanical Engineers (Science & Engineering Wallbook), Sports Wallbook (Telegraph Newspapers), The Shakespeare Birthplace Trust (Shakespeare Wallbook) and the National Trust (British History Wallbook).

It has always been core to the mission of What on Earth Publishing to try to tell stories in accessible, interconnected ways and to champion the fact that for many young people the real world is far more amazing than anything you can make up.

In 2015 Christopher and Andy were commissioned by Sir Robert Worcester, Chairman of the MagnaCarta 800thcommittee, to develop a timeline book for children explaining key moments in the story of freedom and rights from 1215 to 2015. The Magna Carta Chronicle was published to coincide with the 800thanniversary of the sealing of Magna carts on 15thJune 2015. This book, launched with a four page inset in The Sunday Times, was subsequently sent to all 22,000 schools across the UK as part of the Magna Carta commemorations. See BBC News story here 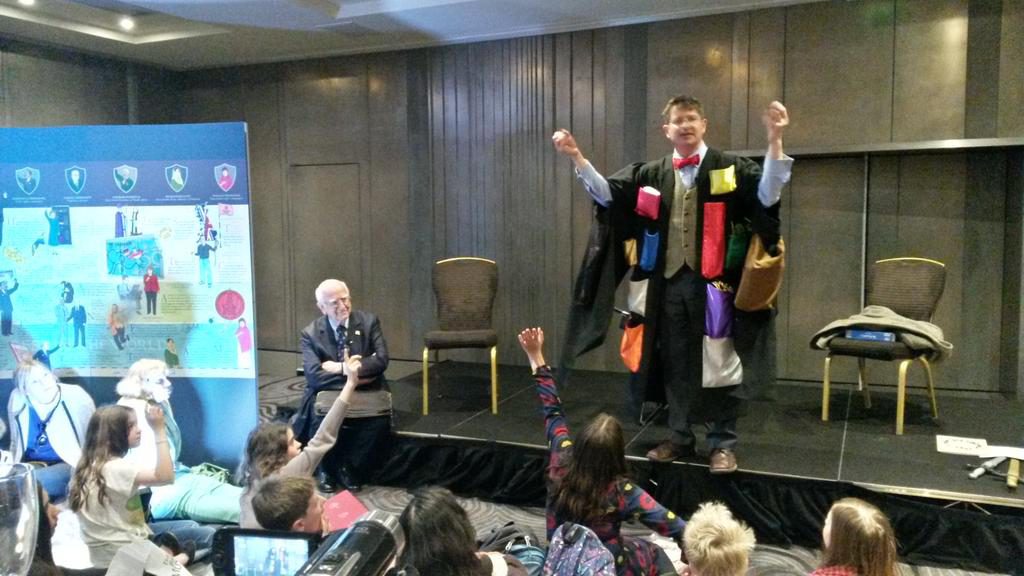 Expansion into the US

The experience of working with Sir Robert manifested itself in what has blossomed into a major expansion for the publishing house over the last 5 years. With collaboration at its core, and a deep desire to take the concept of a more visual, interconnected approach to learning further afield, What on Earth Publishing founded an American arm in 2016. It has since partnered with a range of prestigious US institutions including The American Museum of Natural History, the Smithsonian, The State of Illinois, The Bullock Museum, The State of Massachusetts and Plymouth 400.

What on Earth Books Imprint

In 2017 the team expanded further with the appointment of Nancy Feresten as publisher, formerly Editorial Director of National Geographic Kids (for 17 years). Under Nancy and Christopher’s leadership, and with the art director of Andy Forshaw and the ongoing support of Sir Robert Worcester, the company is now publishing in region of 10-15 books  years by a variety of authors and illustrators under its imprint What on Earth Books. Its best seller to date has been Absolutely Everything! A History of Earth, Dinosaurs, Ruler, Robots and Other Things Too Numerous to Mention. (October 2018) – a narrative history of the world for all ages 6 – 106 , also by Christopher Lloyd. Sales and distribution are managed by Bounce Marketing in UK and Ingram Publisher Services in the US.

In 2017 the company sold its first foreign rights to King In Culture, a children’s publishing house in China. This relationship has blossomed with Christopher being invited on frequent lecture tours across many cities in China. As a result, sales from this region have grown significantly and have driven the company’s growth. In 2019, What on Earth Publishing formed a distribution partnership with Walker Books Australiaf or the sale of tis titles in Australia and New Zealand.

Most recently What on Earth Publishing has teamed up with Chicago-based Britannica Inc to launch a second imprint, Britannica Books, which will be publishing its first titles in autumn 2020.  The first two titles, the All New Britannica Children’s Encyclopedia and 5 Minute really True Stories for Bedtime, represent Britannica’s return to print after an eight year hiatus since its iconic encyclopaedia was made into an online-only publication in 2012.

Britannica Books has an ambitions non-fiction reference books programme that will see the launch of as many as 30 titles in the next 3-5 years. Publishing rights to all of Britannica Books initial titles have already been sold to Chinese publishers.

What on Earth Publishing is always keen to explore collaborative opportunities with like-minded partners who wish to make the world a better place by encouraging the cultivation of nature’s most precious gift – our individual curiosity.